“Precious in the sight of the LORD is the death of His saints” (Psalm 116:15 New King James Version).

Believers in Christ are saints. Writing to the believers in Rome, Paul said, “To all who are in Rome, beloved of God, called to be saints” (Romans 1:7 New King James Version). The saints are redeemed and have been reconciled with God. “For God in all his fullness was pleased to live in Christ, and by him God reconciled everything to himself. He made peace with everything in heaven and on earth by means of his blood on the cross” (Colossians 1:19-20 New Living Translation).

Physical and spiritual death came to man as a result of the fall of Adam and Eve in the Garden of Eden. It is the consequence of their sin. “Therefore, just as through one man sin entered the world, and death through sin, and thus death spread to all men, because all sinned — (For until the law sin was in the world, but sin is not imputed when there is no law. Nevertheless death reigned from Adam to Moses, even over those who had not sinned according to the likeness of the transgression of Adam, who is a type of Him who was to come” (Romans 5:12-15 New King James Version).

To human beings, the death of a loved one is a loss. But if such a person is a Christian and died in the LORD, his death should not be seen as a loss, even though it could be painful. Paul said, “For to me, to live is Christ, and to die is gain” (Philippians 1:21 New King James Version).

The psalmist says, “Precious in the sight of the LORD is the death of His saints” (Psalm 116:15 New King James Version). The New Century Version renders the verse thus: “The death of one that belongs to the LORD is precious in his sight.”

That doesn’t mean that the saints should seek to die now! No. Psalm 118:17 says, “I shall not die, but live, and declare the works of the LORD” (New King James Version). Desire a long life, obey the Word of God, pray for a long life, and confess it daily. Psalm 91:16 says, “With long life I will satisfy him, and show him My salvation” (New King James Version). The LORD says in Exodus 23:26b that He “will give you long, full lives” (New Living Translation) – “I will fulfill the number of your days” (7 New King James Version). Proverbs 1:12-13b says, “Though they are in the prime of life, they will go down into the pit of death” (New Living Translation). But that shall not be your portion. You shall still bear fruit in old age and you shall be fresh and flourishing (Psalm 92:14).

Don’t be afraid of death. Jesus said, “Are not two sparrows sold for a copper coin? And not one of them falls to the ground apart from your Father’s will.  But the very hairs of your head are all numbered. Do not fear therefore; you are of more value than many sparrows” (Matthew 10:29-31 new King James Version).

The New Living Translation gives another perspective to Psalm 116:15. It says, “The LORD’s loved ones are precious to him; it grieves him when they die.” In other words, God is pained by the death of His saints. The Good News Translation renders the verse thus: “How painful it is to the LORD when one of his people dies!” That means it’s not only fellow Christians, relations, and friends that are hurt by the death of their loved ones, who are Christians; God is pained, too.

However, why is the death of the saints precious in the sight of the LORD, as the New King James Version puts it?  I’ve thought about this and found the following reasons:

1.Because the salvation of His saints is precious. That is the process of making them saints is precious. It cost God the life of His only Son (John 3:16). The Bible says that the saints were redeemed, not with corruptible things, with silver or gold, but with the precious blood of Christ, as of a lamb without blemish and without spot (1 Peter 1:18-19).

2. Because the Person the saints believe in is, Himself, precious. 1 Peter 2:6-7 says, “‘Behold, I lay in Zion a chief cornerstone, elect, precious, and he who believes on Him will by no means be put to shame.’ Therefore, to you who believe, He is precious; but to those who are disobedient, ‘The stone which the builders rejected has become the chief cornerstone” (New King James Version). This scripture is referring to Jesus Christ. He is the person the saints believe in, and He is precious, among other things.

4. Because the death of the saints of God brings an end to all their challenges, trials, and troubles and His work in their lives on earth. When God looks at the earth and all that His saints have gone through and compares it to life after death, He considers the death of His saints as a passage into rest and glory.

For example, death puts an end to weeks and months of pain and suffering on a sickbed for people of God who are sick. Sometimes, in certain cases of prolonged illness, relations and friends can no longer bear the pains their loved ones are going through and wouldn’t mind that they’re taken home to rest if their negative condition does not improve. When God allows their death, it is seen as a blessing ­­ – a journey home to rest. “When they arrive at the gates of death, God welcomes those who love him” (Psalm 116:15 The Message).

Shortly before Stephen, the first Christian martyr, was stoned to death, the Bible says, “But he, being full of the Holy Spirit, gazed into heaven and saw the glory of God, and Jesus standing at the right hand of God, and said, ‘Look! I see the heavens opened and the Son of Man standing at the right hand of God!’” (Acts 7:55-56 New King James Version). It was a great loss to the church, but heaven welcomed Stephen home with honour to rest. He died gallantly!

5. Because the death of the saints of God is the gateway to eternity with God. The absence of His dead saints from their loved ones on earth is presence with God. What the world considers a loss is heaven’s gain. Death is not final for the saints! It’s not the end of the road for them. Job, who was blameless and a man of complete integrity, looking forward to life after death, said, “And after my body has decayed, yet in my body I will see God” (Job 19:26 New Living Translation).

Death is the gateway to eternity with God. There is life after death. Isaiah 26:19 says, “Yet we have this assurance: Those who belong to God will live; their bodies will rise again! Those who sleep in the earth will rise up and sing for joy! For God’s light of life will fall like dew on his people in the place of the dead!” (New Living Translation).

Daniel, in his end-time prophecy, says, “And many of those who sleep in the dust of the earth shall awake, some to everlasting life, some to shame and everlasting contempt” (Daniel 12:2 New King James Version).  In verse 13, God assured Daniel, “But you, go your way till the end; for you shall rest, and will arise to your inheritance at the end of the days” (New King James Version).

Paul shared the mystery or wonderful secret of resurrection of the dead. He said, “For the trumpet will sound, and the dead will be raised incorruptible, and we shall be changed. For this corruptible must put on incorruption, and this mortal must put on immortality (1 Corinthians 15:52-53 New King James Version).

Because of the promise and hope of resurrection, he encouraged believers not to mourn the death of those who die in the LORD the way non-believers do. “But I do not want you to be ignorant, brethren, concerning those who have fallen asleep, lest you sorrow as others who have no hope. For if we believe that Jesus died and rose again, even so God will bring with Him those who sleep in Jesus” (1 Thessalonians 4:13-14 New King James Version). Please note that Paul didn’t say believers shouldn’t mourn the death of fellow Christians. He only said they shouldn’t be full of sorrow like people who have no hope since God will bring back with Jesus all the Christians who have died. There is the hope of resurrection to eternal life for the saints.

Conclusion: While we should believe God for long and full life, we should understand that there are just two ways to cease from living here on earth: through death and rapture. 1 Thessalonians 5:10-11 says, “He died for us so that we can live with him forever, whether we are dead or alive at the time of his return. So encourage each other and build each other up, just as you are already doing” (New Living Translation).

What is most important, ultimately, is where one spends eternity, not how long one lives here on the earth. “And I saw a great white throne, and I saw the one who was sitting on it. The earth and sky fled from his presence, but they found no place to hide. I saw the dead, both great and small, standing before God’s throne. And the books were opened, including the Book of Life. And the dead were judged according to the things written in the books, according to what they had done. The sea gave up the dead in it, and death and the grave gave up the dead in them. They were all judged according to their deeds. And death and the grave were thrown into the lake of fire. This is the second death — the lake of fire. And anyone whose name was not found recorded in the Book of Life was thrown into the lake of fire” (Revelation 20:11-15 New Living Translation).

Glory be to God!  Precious in the sight of the LORD is the death of His saints. But you and your loved ones won’t die before your time; you won’t die prematurely. You will serve your full tenure on the earth.

If you are not born again, you need to give your life to Jesus now. I urge you to take the following steps: *Admit you are a sinner and you cannot save yourself and repent of your sins. *Confess Jesus as your Lord and Saviour. *Renounce your past way of life – your relationship with the devil and his works. *Invite Jesus into your life. *As a mark of seriousness to mature in the faith, start attending a Bible-believing and Bible-teaching church. There they will teach you how to grow in the Kingdom of God.

Kindly say this prayer now: O Lord God, I come unto you today. I know I am a sinner and I cannot save myself. I believe that Jesus is the Son of God who died on the cross to save me and resurrected the third day. I repent of my sins and confess Jesus as my Lord and Saviour. I surrender my life to Jesus now and invite Him into my heart. By this prayer, I know I am saved. Thank you, Jesus, for saving me and making me a child of God.

I believe you have said this prayer from your heart. Congratulations! You will need to join a Bible-believing and Bible-teaching church in your area where they will teach you how to live your new life in Christ Jesus. I pray that you flourish like the palm tree and grow like the cedar of Lebanon. May you grow into Christ in all things and become all God wants you to be. I will be glad to hear from you. The LORD be with you. 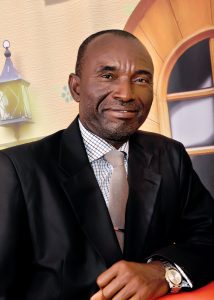